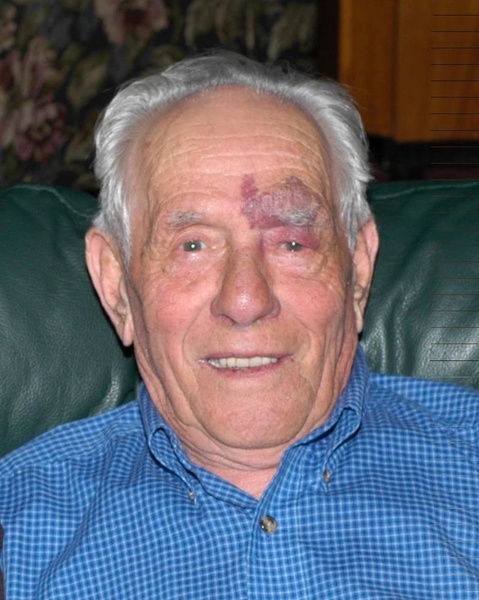 Surrounded by the love of his children and grandchildren, Yvan (“Mop”) passed away peacefully in the wee hours of Saturday, June 2, 2018.

Dad was born on September 16, 1929 to the late Dona and Arthur Lefebvre.  He is predeceased by his wife Claire (Gervais) Lefebvre. Husband, father, grandfather, friend, uncle, brother, brother-in-law, Dad was a lot of things to a lot of people.  He lived a rich and full life, and has left a legacy of love, treasured moments and happy memories. Family was everything to Dad. He inspired, he listened, he taught, and he led by example.  He inspired us to be better people. By his example, he shaped us in being the parents we are to our children; the spouses we are to our partners; he instilled in us the importance of family. Dad listened without judgment and always had quiet words of wisdom when they were needed.  Grampaw adored his grand kids, all of whom had tremendous respect for him (despite the teasing). He was well-known for his sense of humour  - right up until the end. And he was a rascal.

Yvan’s legacy will live on in his family.  He is survived by his children Danielle Thomas (Ernest) of LaPasse, Guy Lefebvre (Sue) of Toronto, Anne Gervais (Jim), Linda Lefebvre (Ken Suddaby), Francine Rowsell (Wayne) and Denise Rudzinski (John, and the late Stan Lavergne) all of Ottawa. The best and most rascally Grampaw ever to Jonathan Thomas (Lina), Andrew Thomas (Lindsay), Kendra Renaud (Sean), Stephan and Tara Lefebvre, Jamie Gervais (Todd), Charles Gervais (Stephanie), Derek St-Amour, Carolyn St-Amour (Andrew), Luke Rowsell (Sabrina), Matthew Rowsell, Christopher Lavergne (Joelle), and Justin Lavergne (Bethany).  Dad was so proud of his first great-grandchild, William Thomas, whom he got to meet and hold a week before he died.  Loving step-Grampaw to Cadence, Selah and Janusz Rudzinski, and to Amélia, Paul and Vincent Suddaby. Special great-Grampaw to Madysen and Gabryela Allard.  Yvan was the last surviving member of his family, and is predeceased by his brothers Sarto (the late Viola), Donatien (the late Estelle) and Gaston (the late Rose). Dear brother-in-law to Orval Gervais (Joan), Inez Winter (Ted), Kathleen Gohr (the late Bob), Ruth Dinn (Gerry), Pat Gervais (Elise), the late Eileen Everitt (the late Jack), the late Roy Gervais (the late Agnes), the late Viola (the late Sarto), the late Cecil Gervais (Anne), the late Leonard Gervais (Marion, and the late Mary), the late Harry, Artie and Doug Gervais. Grampaw loved animals. He was Timbit mule to George and he will be sorely missed by his “kids” Isabelle and Finnigan. He will be lovingly remembered by his many nieces and nephews.

Sincere thanks the nursing and medical staff at the Renfrew Victoria Hospital for their compassion and outstanding care.

To send flowers to the family in memory of Yvan Gilles Lefebvre, please visit our flower store.

Our Lady of Mount Carmel