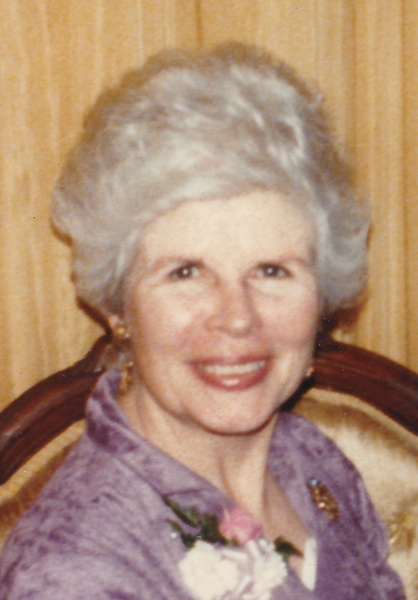 Mabel Marguerite Rodgman (nee McConaghy) Mabel entered peacefully into rest after a long battle with Alzheimer's disease on Friday, September 29, 2017 at Miramichi Lodge in Pembroke, Ontario. She was born October 4, 1923 in Fredericton, New Brunswick and was a proud Canadian Maritimer. Mabel was the beloved wife of the late Frederick Charles Rodgman (1983) also predeceased by her daughter Susan Howes (2013) and grandson Andrew Rodgman (2011). She leaves behind her sister Dorothy (William) Jarvis, and her sons Stephen (Holly) and Graeme (Sylvie).  Loved grandmother of Catherine (Timothy Wade) Howes, Johanna (Steven) Tremblay, Stephen Rodgman, Christopher Rodgman, and Mark (Tania Kabantsov) Rodgman; loved great-grandmother of Elijah, Emma, and Noah.  She will also be missed by her many friends and extended family including former son-in-law Trevor Howes, and former daughter-in-law, Susan Rodgman.

Always impeccably dressed, Mabel lived a full and happy life. She was an avid Bridge player and could not be beat at Scrabble, despite many valiant attempts by her children. She was always singing or humming a tune. Even into the years of her declining health, Mabel continued to sing the songs of her youth including her favourites "It's a Long Way to Tipperary" and "My Bonnie Lies over the Ocean".

Mabel was an active member of her community, serving on the Royal Victoria Hospital Auxiliary for over two decades, including 2 years as President. She was also an active member of Central United Church for over 40 years until she was unable to attend services due to her ailing health.

Mabel had a love of travel and spent much of her retired life seeing the world including trips to Portugal, England, Israel, China, Egypt, and her ancestral home of Scotland. As a military wife, she had the opportunity to live in multiple cities throughout Canada and the US including Greenwood NS, Comox BC, and Jacksonville, FL.

Most notably, she had a great love and dedication to her family. She was an influential presence in her grandchildren's lives, especially as young children. Despite sometimes long distances, she visited as often as possible.

Special thanks to the wonderful staff at Grove Park Home, Maple unit (Barrie, Ontario) for the friendship and many years of caring for Mabel. Friends and family are welcome to attend an interment ceremony at 1:00 p.m. on May 5, 2018 at Midhurst Union Cemetery in Barrie, Ontario. Cremation has taken place. Memorial donations to the Alzheimer's Society of Canada in memory of Mabel would be sincerely appreciated. Funeral arrangements entrusted to the Malcolm, Deavitt & Binhammer Funeral Home, Pembroke. On line condolences and memorial donations can be made at www.mdbfuneralhome.com

To send flowers to the family in memory of Mabel Marguerite Rodgman, please visit our flower store.