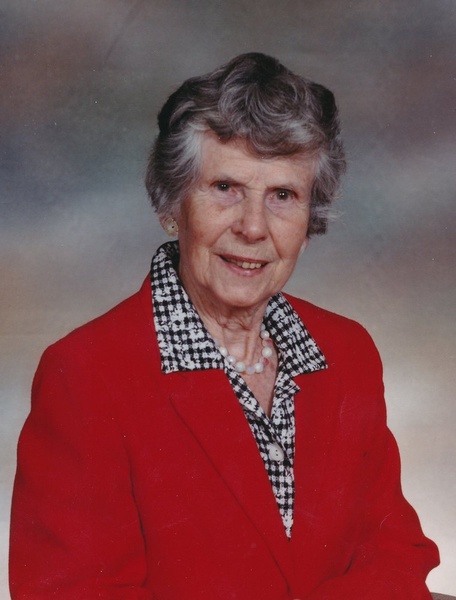 Janet was born in Pembroke Ontario on October 1, 1920, and attended Pembroke Public Schools. She graduated from the Pembroke Collegiate with a commercial diploma and subsequently trained at the Children’s Hospital in Montreal, working as a private children’s nurse after graduation. At the onset of World War II she changed careers to work in the Personnel Department at Defense Industries Limited in Montreal, and after the war transferred to work at the Atomic Energy Canada Limited in Chalk River. Around 1956 she joined the Personnel Department at DuPont in Maitland Ontario and lived in Brockville until 1981 when she retired and moved back to live in Pembroke.

She enjoyed a full life of travel abroad, throughout Canada and the United States. She spent many happy summers at the family cottage on Allumette Island. She was an active curler and lawn bowler in Brockville and continued to carpet bowling in Pembroke well into her 80s.  Janet had a quiet presence, and a generous spirit, always delighting in visits from her many family members both at the home she shared in Pembroke with her sister Gwen, and then at Riverview Heights where she spent the last 7 years. She enjoyed her life at Riverview and in particular liked to see her furry friend Wally.

Janet had an optimistic outlook throughout her long and healthy life. She chose her own path and lived with quiet determination. Her indomitable strength of character as well as her steadfast presence will be missed and she will be fondly remembered by all who knew her.

Cremation has taken place, and a Memorial Service will be held at the Malcolm, Deavitt & Binhammer Funeral Home Chapel on Saturday, May 19th at 11:30 a.m.  Friends may call after 11:00 a.m.  For those desiring, donations to Calvin United Church, Pembroke Community Living, the Salvation Army or a charity of your choice would be greatly appreciated. Online donations and condolences may be made at: www.mdbfuneralhome.com.

To send flowers to the family in memory of Janet Stewart, please visit our flower store.