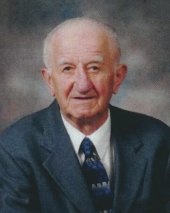 KUTSCHKE, Harold Victor "Charlie" - passed away peacefully in hospital on Saturday, March 30, 2019 at the age of 93 years.

Visitation will be held at Christ Lutheran Church, Petawawa on Saturday, April 6, 2019 from 10:00 a.m. until the Funeral Service at 11:00 a.m.  Spring Interment in Christ Lutheran Cemetery.  Arrangements entrusted to Malcolm, Deavitt & Binhammer Funeral Home, Pembroke.  (As an expression of sympathy, donations to Carefor Pembroke - Civic Complex, Christ Lutheran Church, or a charity of your choice would be appreciated.)  Online condolences and donations are available at www.mdbfuneralhome.com.

Harold Victor Kutschke was born on August 28, 1925 in New Manitoba, North Algona Township as the fourth of eleven children to Adolph and Mary (nee Schoenfeldt) Kutschke.

Shortly after his birth in 1925 the family moved to a farm in Germanicus located off Lake Dore Road. In those early years Harold helped on the farm feeding and milking cows, and doing other chores including picking stones. The stone fences witnessed today on the farms around the Germanicus area lay as a testament of the hardworking farmers who made a living off the land at that time.

Many a ball game in the summer and shinny games in the winter were played by Charlie, his brothers and relatives on the field behind the farm house. I am not sure how he received the name Charlie but I am willing to bet it came from his brothers who had names other than their given names including Teddy, Mike, Brunie and Otto.

Harold worked in the lumber camps in Renfrew County and spent time in Kitamat, BC before returning home to work at Brum’s Dairy in Pembroke. He drove the milk tanker gathering raw milk from dairy farmers in and around Pembroke. His day started early and ended early always having time to stop at the “Office” as he called it before heading home or hitting the golf course.

Many stories were told at the Office and later on at the Legion where he enjoyed the company of his friends. He always said the beer was colder and tasted better at the Office or the Legion than anywhere else. Whenever a fresh bottle was cracked open and poured into a glass, he often voiced the words “Good good good good”. He would follow that by saying “Some days are more fun than others”. He enjoyed life and lived it to its fullest.

Harold was a faithful member of his Church throughout his life except in the latter years when his age prevented him from attending. He sang in the church choir at both Germanicus and Petawawa with his natural tenor voice adding to the beauty of the music. He also sang in the community choir under the direction of Kevin Nieman.

Charlie played the guitar, mandolin, fiddle and accordion. In the early days he played in several bands, the first one with his brother Norman (aka Mike) and friend Martin Moratz and the second with his brother Wallace, brother-in-law Wilfred and friend Mervin Zadow. His musical talents entertained many folks who attended the numerous barn dances and weddings around Germanicus and Golden Lake.

In later years he played the guitar and sang or yodelled old Wilf Carter tunes including “The Blue Canadian Rockies”, “My Little Yoho Lady” and “Strawberry Roan”.

Uncle Charlie, as he was known to his many nieces and nephews enjoyed family gatherings with his brothers and sisters especially at Christmas time. He was a very competitive card player and always let his euchre partners know when they made a mistake. His nieces and nephews here today will recall his carding playing ability.

Charlie always enjoyed playing and coaching sports whether it was softball, broomball, hockey, golf or bowling. He excelled at every sport he played winning many trophies and prizes for his effort. He also enjoyed the annual deer and moose hunt with his friends.

As most of you know, Charlie’s view on any particular subject or issue, was either black or white, no gray.  Even with displays of what I would call stubbornness, down deep was a kind heart who would lend his time, talents and financial resources to relatives, friends and neighbours and to those in need. He always had a story to share and whoever did not know Charlie when they entered the room, they certainly knew him when they left.

When Charlie was starting to slow down in life, he had a number of angels (Charlie’s Angels) who took care of him including his nephews James and Steve, his good friends Mack and Randy, his buddies at the Legion and his caregivers at Carefor. They were there for him right up to the end.

I have many other memories about Charlie as I’m sure we all do. He will be remembered, missed and loved by many.

I would like to close with the German departing saying.

To send flowers to the family in memory of Harold "Charlie" Kutschke, please visit our flower store.