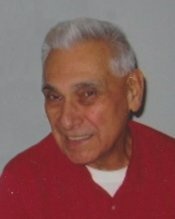 PANTUSO, M. Frank - passed away at Marianhill, Pembroke, surrounded by his family on Tuesday, March 13, 2018 at the age of 91 years.

Frank Pantuso of Petawawa, dearly loved husband of the late Betty Pantuso (nee Harris).  Cherished father of Joanne Weston, Nova Scotia; Joni Sandrelli (Pat), Pembroke; Jayne Pantuso (John Riendeau), Pembroke, and Judy Lapierre (Jack), Petawawa.  Adored grandfather of Holly & Keith Weston; Tanya Sandrelli & Shauna Foss (Evan); and Joel, Luke & Erika Lapierre.  Great-grandfather of Connor, Cody & Caden Maschke; and Kennedy & Reagan Foss.  Frank was born in Trail, BC, but was raised in Celico, Cosenza, Italy.  He returned to Canada to make a living in many ways including the railroad, merchant navy, the army and as a beachcomber.  After he and Betty were married in 1956, Frank left the army and worked in moving, insurance & real estate before owning & operating the Harris Coffee Shop.  He was perhaps best known with all the kids for his candy jar at the Cook's Apron in the Pembroke Mall.  Frank enjoyed golf, boating, crosswords & sports, but family always came first.

Respecting Frank's wishes, cremation has taken place.  Funeral Arrangements are private and have been entrusted to Malcolm, Deavitt & Binhammer Funeral Home, Pembroke.  (As an expression of sympathy, donations to a charity of your choice would be appreciated.)  Online condolences and donations are available at www.mdbfuneralhome.com.

To send flowers to the family in memory of Frank Pantuso, please visit our flower store.