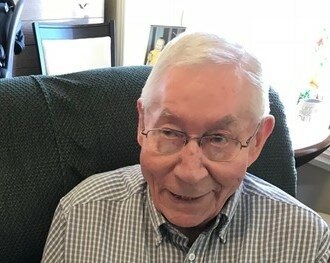 Doug worked for many years as a specialty butcher and owned Riverview Foodmarket in East End Pembroke. He was known especially for his lovingly crafted smoked sausage. He loved his time at the family cottage on the Ottawa River and was beloved of nearby children as someone always ready to take them water skiing. He and Shirley were also avid golfers and curlers into their 80s. Doug was always intensely interested in people, ready to strike up a friendly conversation with strangers, and intent on placing them within the amazingly large network of Pembroke family and social relationships he possessed. He would meet a new server at Riverview and within minutes would have established who their parents were, and probably just how they were related to him or someone he knew. Pembroke was his home and extended family. Doug was a faithful member of St. John’s Lutheran Church and quintessential family man and a loyal and loving husband. Modest, warm, and caring, he was someone who took life as it came but strove to give back his very best in return. He will be deeply missed by all who knew him.   Doug was a resident of Riverview Heights seniors’ residence for many years and the family is grateful to the many people living and working there who, over the years, enriched his life there. They are also grateful to the third floor doctors, nurses, and staff at Pembroke Regional Hospital for their care during his final weeks.

Funeral Service Saturday, May 14 at 11:00 am at St. John’s Lutheran Church, Pembroke.  Interment at the Parish Cemetery.  Arrangements entrusted to Malcolm, Deavitt & Binhammer Funeral Home, Pembroke.  As an expression of sympathy, donations to Parkinson Canada appreciated. Online condolences and donations are available at  www.mdbfuneralhome.com

To send flowers to the family in memory of Douglas Burger, please visit our flower store.