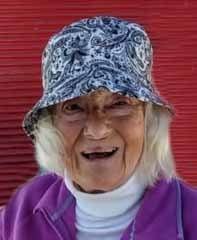 Cleaver, Bridget Josephine “Jo” – passed away peacefully at Riverview Heights, Pembroke on Sunday, October 11, 2020 at the age of 96.

Bridget Josephine “Jo” Cleaver (nee Heffernan) was born April 10, 1924 in Kildare, Ireland.  She is survived by her son Adrian Cleaver (Sandy Presley), as well as several nieces and nephews who reside in the United Kingdom.  She is predeceased by her husband Robert “Bob” Cleaver Jr., her brother William “Bill” Heffernan and his wife Patricia Heffernan, her brother Patrick “Chris” Heffernan and his wife Patience Heffernan, as well as her brother-in-law Maurice Cleaver.

Jo’s family left Ireland when she was a young girl to live in Aldershot, England.  During the war Jo lived in London and would often recount the experiences she had during the Blitz.  In 1947 she was serving food to members of the military at a function when she caught the eye of RAF Warrant Officer, Bob Cleaver.  Bob and Jo were married in 1949 and were inseparable until Bob’s death in 1987.

Jo worked at a variety of jobs over the years, including MGM Studios in England, Carleton Board of Education and the Cancer Clinic at the Ottawa Civic Hospital.  She spent many happy years living at the Tompkins Housing Co-Operative in the Little Italy neighbourhood in Ottawa.  Jo moved to Riverview Heights, Pembroke seven years ago and loved getting outside to walk, chat, feed the birds and have the occasional glass of wine.  Much thanks and appreciation to the staff at Riverview Heights for all their care and attention.

Respecting Jo’s wishes, cremation has taken place.  A private interment of ashes shall be at Pinecrest Cemetery, Ottawa.  In memory of Jo, donations to the World Wildlife Fund Canada Foundation or Doctors Without Borders would be appreciated.  Arrangements entrusted to the Malcolm, Deavitt & Binhammer Funeral Home, Pembroke.  Online donations/condolences are available at www.mdbfuneralhome.com.

To send flowers to the family in memory of Bridget "Jo" Cleaver, please visit our flower store.